MURSALSKI TEA Herb for any pain 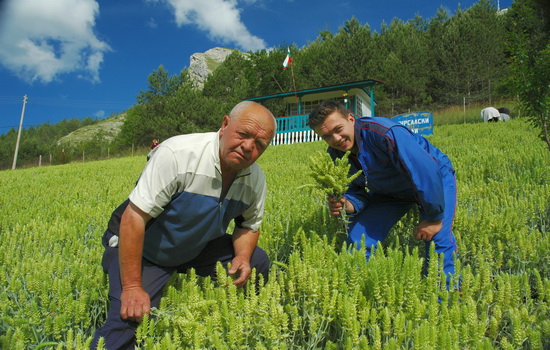 For almost 15 years Lyuben Ushev cultivates Mursalski tea (Sideritis scardica, Mountain tea). Starting with a few seeds, nowadays he annually produces hundreds of thousands of seedling roots and his tea plantation near Trigrad spans over 20 decares. The tea he grows, although cultivated, has the same qualities as the one found in natural deposits. The plantation is near the site Mursalitsa at 1400 meters altitude, where is the natural environment of the famous herb. To date, Mr. Ushev is the most successful seed producer, seedling producer and best quality producer of Mursalski tea. As such he has already received world recognition.

All this is achieved with hard work, desire and love for the land and nature. And the story goes like this: Luben Ushev knew for the herb-cure from his father Asen Asenov Ushev, who was very familiar with its healing properties, and for years was picking it up from its natural deposits. His father was telling everyone that thanks to Mursalski tea, he had no pains and he wanted more and more people to find out about its curative qualities. In fact, he was the first who discovered the tea and started selling the hot drink. Initially at the market in Ustovo and then in Plovdiv. He started to do this in 1943 and continued until 1956 when he had to stop traveling because of the prohibition to pick up the herb. To his son Luben he used to say : If you want to succeed in life, plant  and cultivate this tea and it will repay you. Luben remembered his father's words and recalled them in 1995 when he found himself unemployed. At that time, the former miner was living in Smolyan with his family.  He brought some seeds from the village of Trigrad and planted them. Initially, from all seeds, only one root sprouted. This startled him, but he didn't give up,  and he tried again.

He enclosed small space by the river and made a garden. He took out all stones and debris from the deserted land and step by step transformed it into a paradise-garden. In order to create the best conditions for the tea to grow as close as possible to its natural environment, he brought in several trucks with fertile soil from the mountain. With much care and persistence, step by step, he succeeded to produce from one single seedling root a real tea plantation. He made it, close to his native village Trigrad, below peak Mursalitsa, at 1400 metes altitude and near the natural habitat of the herb. For cultivating the tea, he is supported by his entire family: his wife, his two sons, his grandchildren. From the 7 decares, he harvested nearly a quarter ton of tea last year. He also produces over 700 000 seedling roots annually. He says that if there is enough land, with the seedling roots produced so far, he can make a 20 decares plantation.

When he is not busy working at the plantation, Ushev sells the valuable herb in the center of Smolyan. And he is not just selling it. He tells the locals and tourists about the properties of the tea, its healing powers, he gives them instructions how to prepare it. He is happy to tell people how he cultivates the herb, how  he gets up early in the morning before sunrise and picks up the tea, because at sunrise its valuable oil is most condensed. "I have to hurry and not let the bees collect the precious nectar first." Luben says. His dream is one day Mursalski tea to be taken out of the Red Book. He is willing to provide seedlings to anyone who wishes to cultivate it. And just like his father, he is convinced that it is not for nothing they call it the Rhodopean Viagra and that the healing properties the tea possess are not just words. “I have never suffered from headaches, I haven't been sick and I enjoy sound health in spite of all the years spent in the underground mines.”, Ushev says. He is happy that Mursalski tea's fame is coming back again. More and more people know about it and seek it. Not only in our country but also abroad. Paradoxically foreigners are the first to appreciate its qualities. From them Luben received recognition as guardian of nature and producer of ecologically clean product. Mursalski tea remains the most fragrant tea and has the best healing properties, growing high in the mountains near Mursalitsa where the air is crystal clear, and no petrol fumes and dust exist. 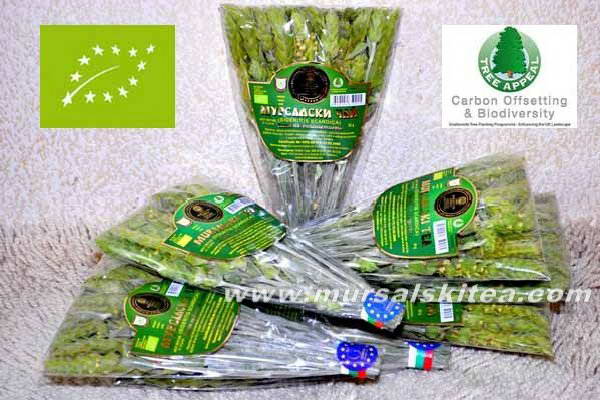 Mursalski tea from its natural location – the rocks in Durduga area, near the village of
Trigrad - ecologically clean area - 1300 m altitude. With a unique taste and many nutrients. 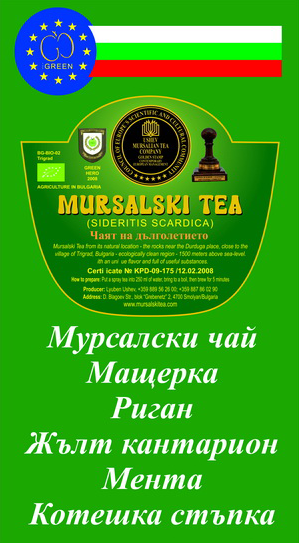 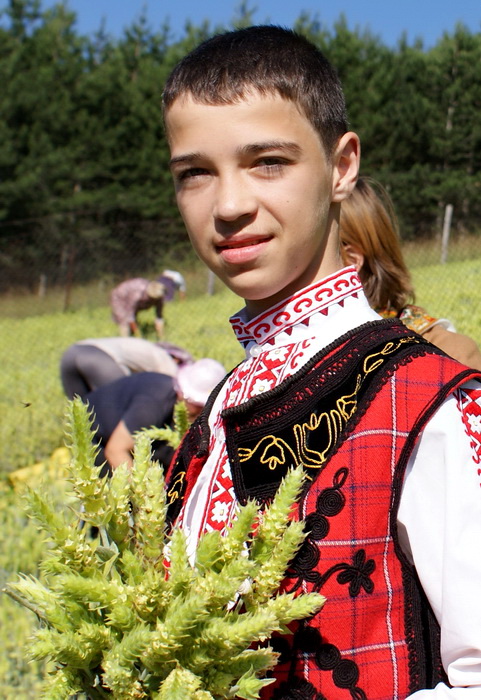